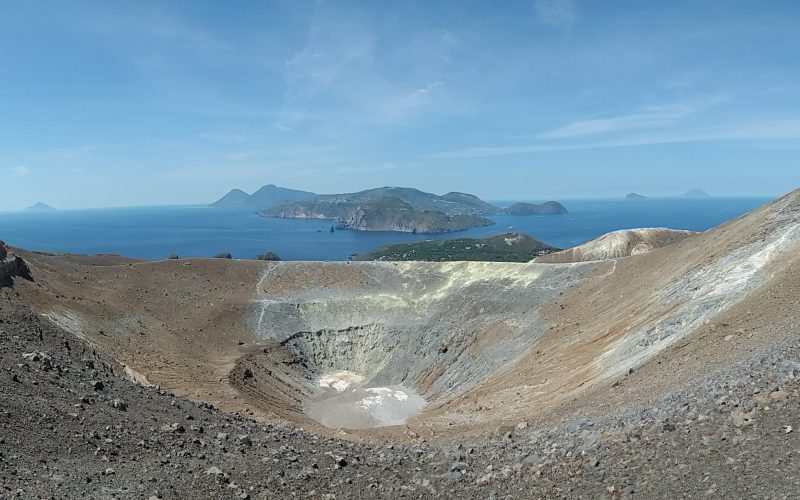 The ferry from Lipari to Vulcano runs fairly frequently so you don’t have to worry about planning this trip too far ahead of time if the weather is good.  If the weather is bad I would not take this trip, one other option is the hydrofoils that also travel across but not as frequently. 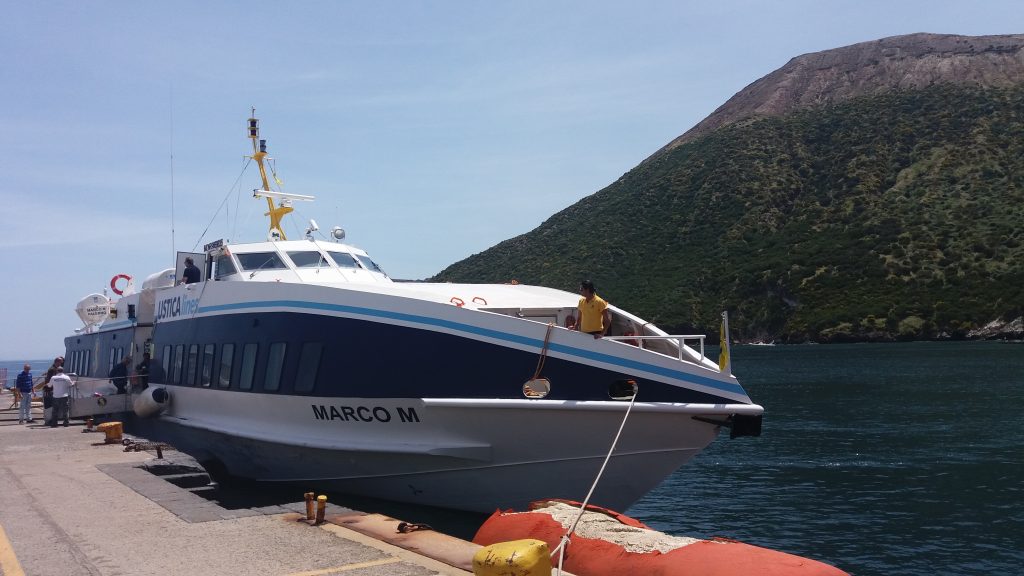 The ferry was about 15 minutes late and it was somewhat of an older ferry and felt like riding in an old school bus, so consider bringing a pair of headphones to drone out the noise. But for a cheap day out it’s perfect at just 5.50 each way it’s very affordable compared to doing an organised tour.

Since I didn’t climb Stromboli I thought I wouldn’t pass up the opportunity to climb another Volcano and certainly not one on an island called Vulcano! I arrived around lunch time and had about 5 hours until my schedule time back to Lipari which I assumed should be more than enough time to explore the place.  Also it was my last full day of my holiday so I had to still explore a little bit more of Lipari before the sunset and the shops closed.

The first tip I would suggest is avoiding walking past the sulfur mud bath as the smell is very over powering and I have no idea how people were enjoying covering themselves in the mud. 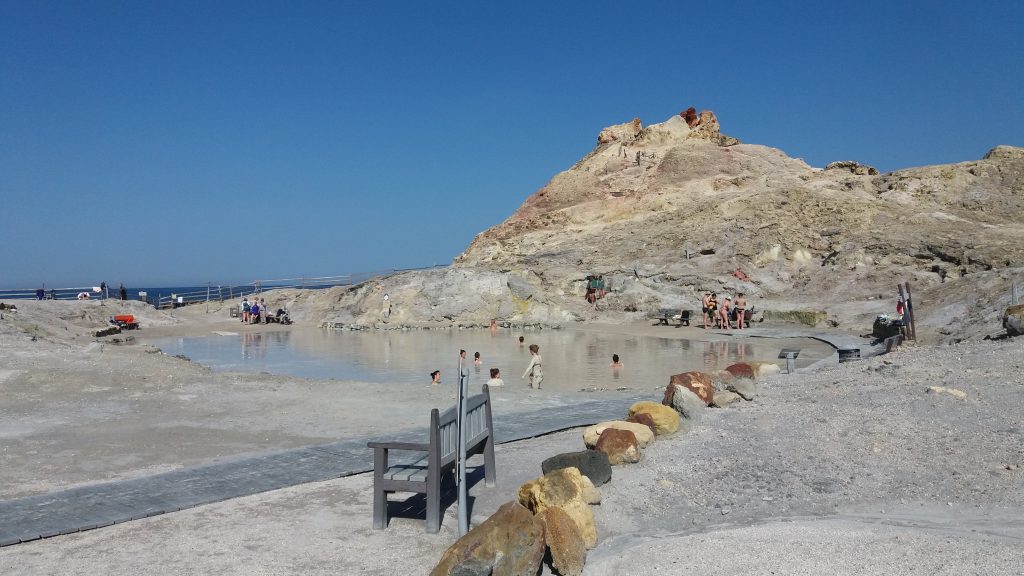 I quickly walked by the area and grabbed the first bunch of gumtree leaves and crushed and inhaled them to try and remove the horrible smell of rotten eggs.  After managing to survive my first major crises of senses I headed off to the shops to buy another bottle of water and some snacks for my climb up the mountain. I found the Conad supermarket (Via Porto Levante Vulcano) easy enough and there was a second one so you don’t have to worry about bringing everything from Lipari.  The 800 meter climb to the top the the crater is reasonably well sign posted, if all else fails head towards the giant mountain and follow the stream of tourists. 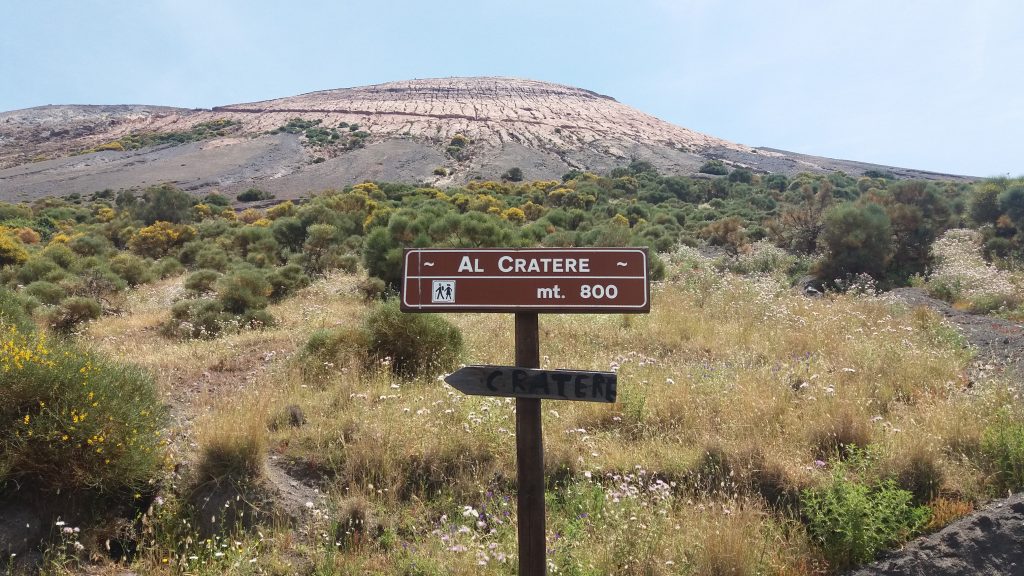 I would suggest you take your time getting to the top of the crater as it takes about 1/5 of the time to get back down.  The paths are a combination of loose gravel, rocks, mud, and in some places gravel a few inches deep which is like walking in sand so don’t wear your best shoes and try not to do this in open shoes like sandals or thongs. 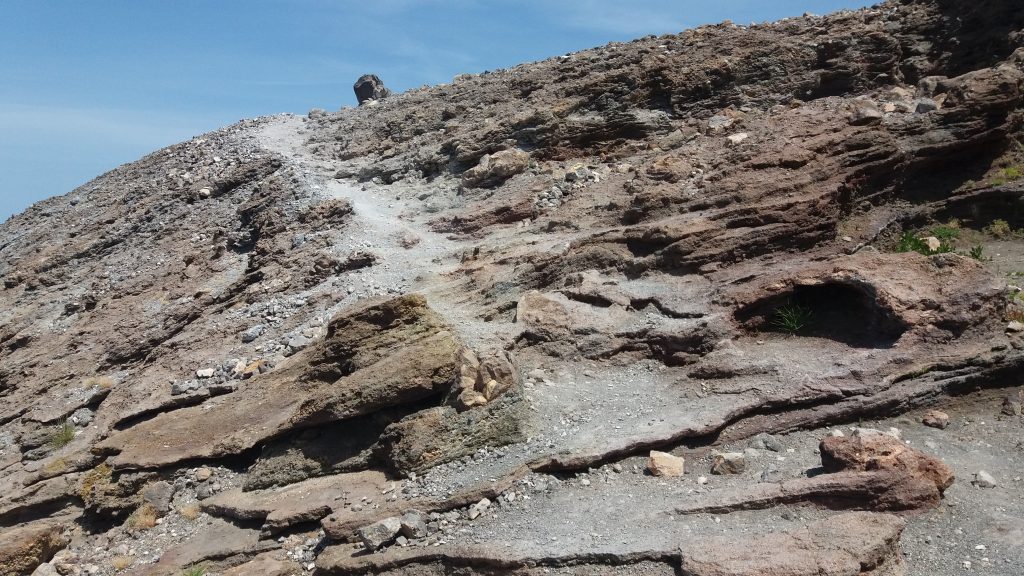 Rock path near the top

I would be also careful doing this climb in the rain as some parts of the mountain are very slippery. 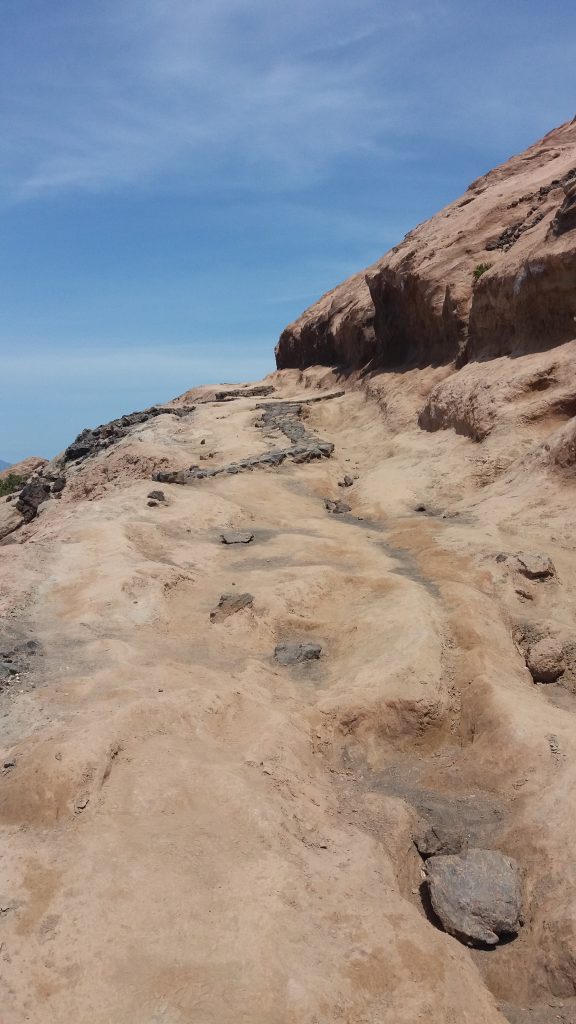 But the best thing about climbing mountains is the view you get when you stop for rest!

It was worth the effort for sure once I reached the top, you get to admire this amazing crater and awesome views of the island.

You can then walk around the crater edge which starts with walking through some sulphur fields which are both horrible smelling but amazing.  I would certainly recommend a trip to Vulcano just to spent some time exploring the sulphur fields. 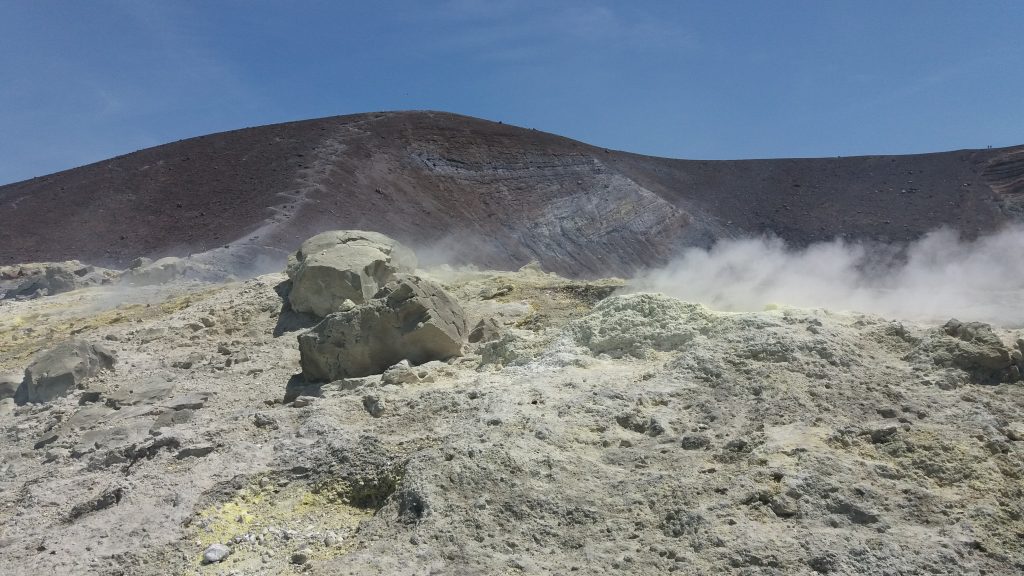 I stopped and spent probably too much time here but it brought back all my memories of high school science an the amazing things that can happen on a volcano.

I was able to observe sulphur in liquid form that was several centimeters long which I had only heard about before, which meant the temperature was over 200 degrees. 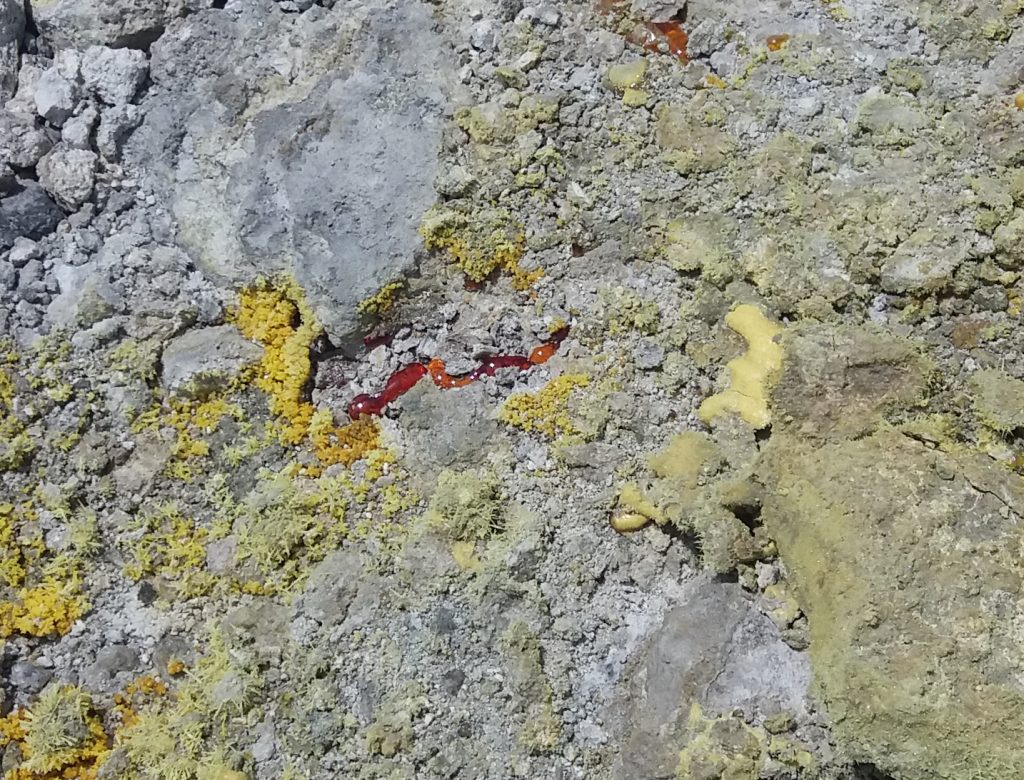 I was about to observe several fumaroles with tiny yellow sulphur needles around them, which while looking beautiful were extremely hot! 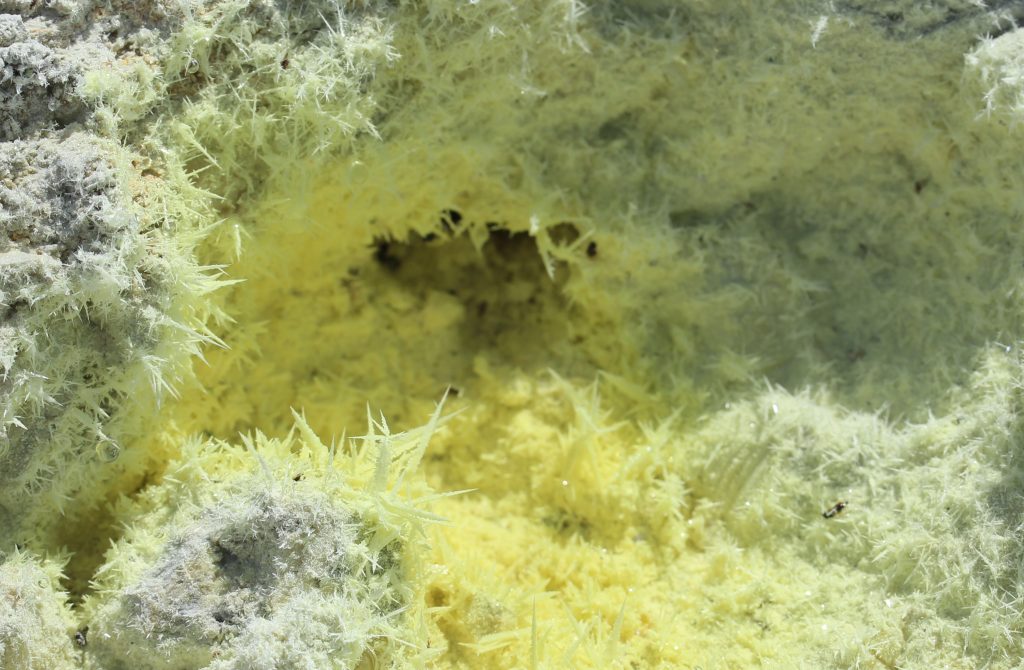 I also spotted several thin layers what I think was Calcium sulphate around some of the hottest vents that has a melting temperature of around 1,460 °C. 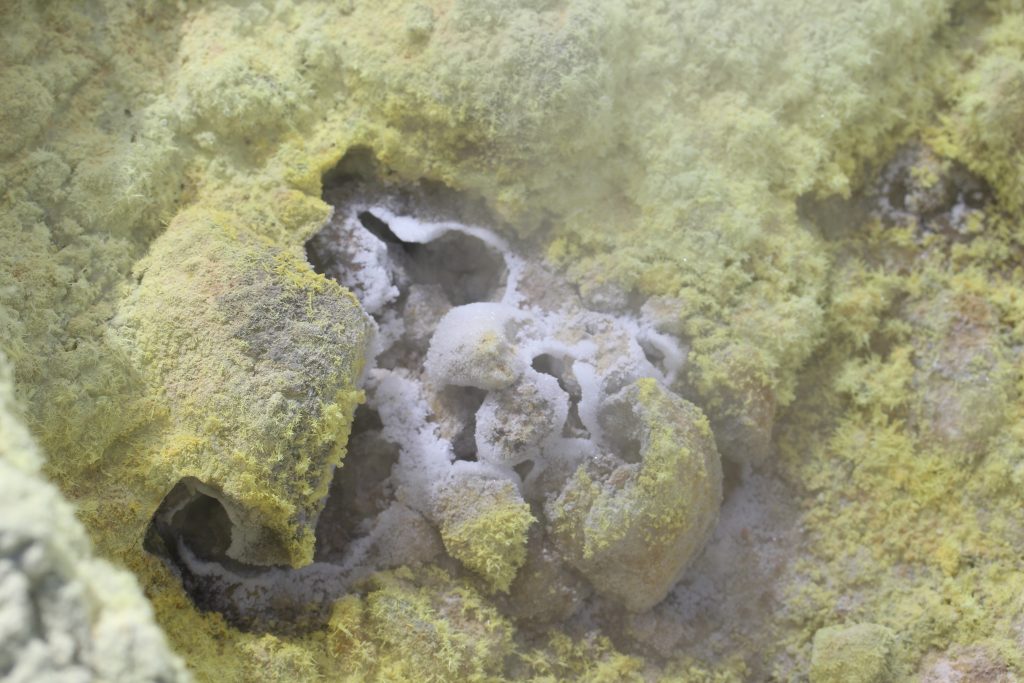 After spending too much time photographing the sulphur fields, I set off around the rest of the crater edge, which involved yet another fairly steep climb to the top east corner.  From the higher side of the crater you had an amazing view of the islands but also the crater below which made you put your size compared to a volcano into perspective and made me respective them a fair bit more.

Once I finished exploring the crater I thought it was finally time to go for a swim, since the weather was warm enough and it was my last chance to do it.  I found a lovely cove on the west side of the island that was mostly deserted and far enough away from the sulphur baths that I could enjoy the tranquility.

Oh yeah the only downside was the Jellyfish that I found floating just off the shore so I didn’t do too much swimming just stood there at weight height and cooled down.  I checked later and found out they were one of the most dangerous of all the species in the region, the Pelagia noctiluca have a horrible sting and can leave scars their toxin is so strong. 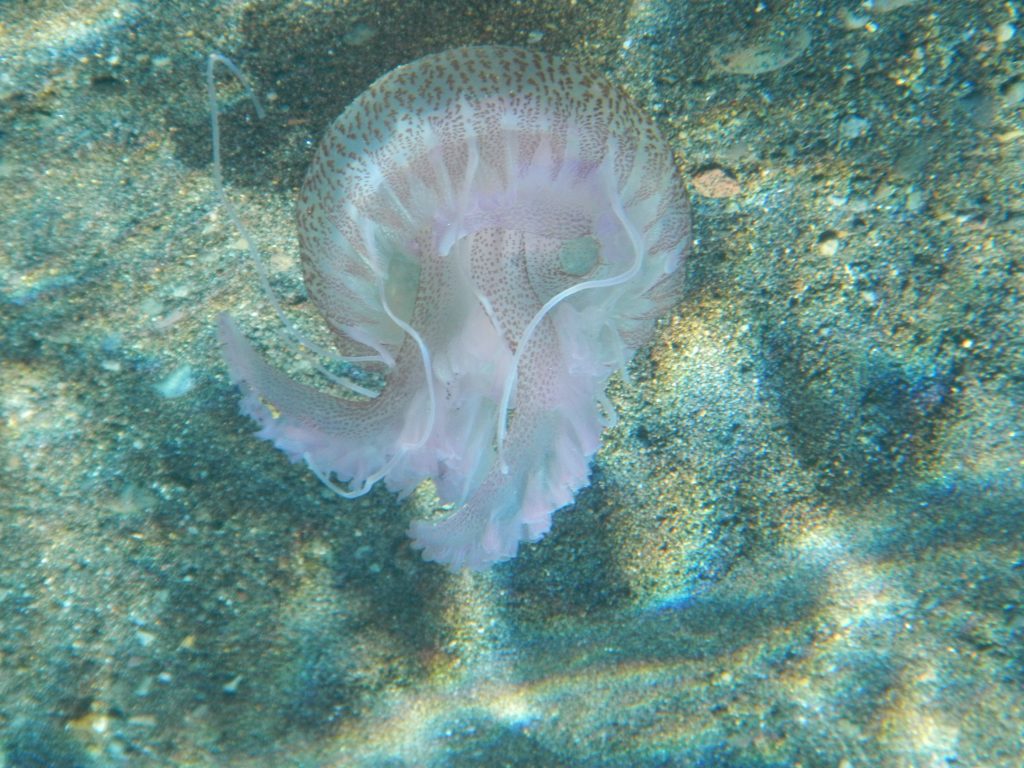 It was finally time to depart and begin the 10 minute walk back towards the port to catch the ferry back to Lipari.