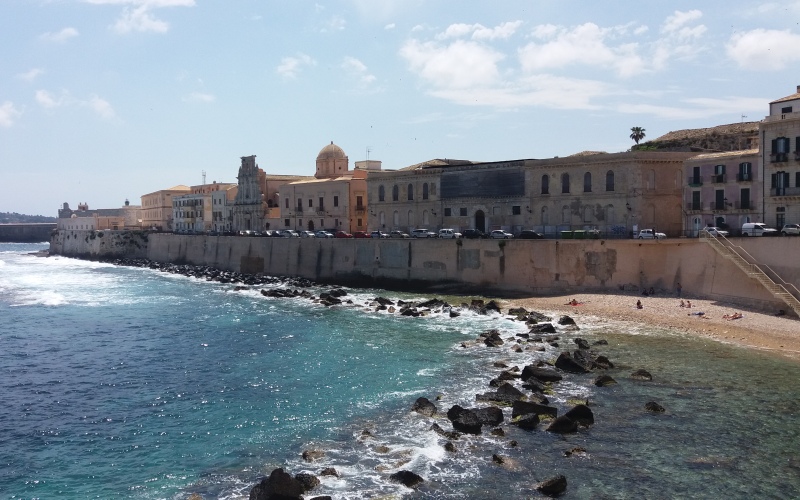 I had a super busy first day exploring Syracuse because the weather was good I thought I should take advance of it. I left my Airbnb accommodation after a lovely breakfast and headed down towards Isola di Ortigia (Città Vecchia) via the marina.  I had a chance to see the locals fishing, repairing boats and sitting around having all sorts of conversations.

As I was crossing Ponte Umbertino into the old town, I saw a stand for boat tours which was offering excursions to the Sea Caves of Gargano and around Oritiga island which I decided should be fun. 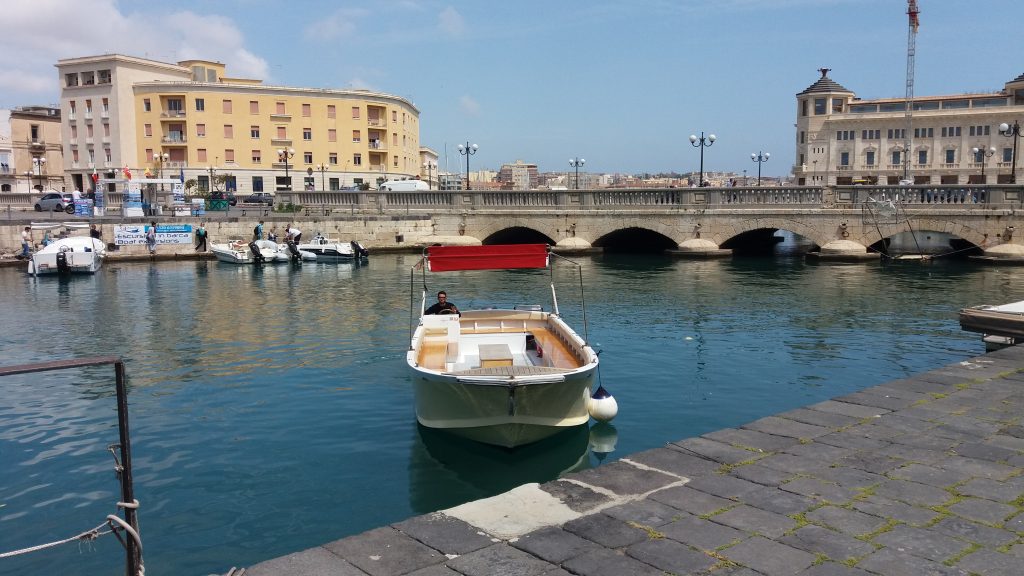 I asked the girl how much and how often they were departing she said it depended on if I went for the 60 or the 90 minute tour.  She got on the radio to check and was told the next one was in about 90 minutes which was ok but after yelling into the radio she said oh it’s fine there is one leaving in 15 minutes if you want to join. I recall the ticket was about €15 or something like that, I couldn’t find my receipt.

There was 4 other people on my boat, all Dutch folks who were like myself escaping the last of the European winter.  But were just as annoyed that it was warmer in Amsterdam than it was here in Syracuse.  The boat took us out into the ocean and past Pista Ciclabile Rossana Maiorca towards the caves, the seas were a little bit rougher than they looked and we couldn’t get too close to the caves which was fine as I didn’t feel like being shipwrecked and I was feeling a little sea sick so happy to head back towards the calmer water of the bay as the swell felt like 6-9 feet at times.

The tour around Ortigia island was much better and offered a wonderful view of the ancient city from a different perspective.  I would recommend just doing the Ortigia Island tour if you visit Syracuse, but do make sure it’s good weather and there aren’t too many waves as it gets really rough.  I did find it interesting once we passed around Castello Maniace that the waves stopped immediately and you can see how calm the water is in the photo above.

We were dropped back at the main dock where the tour started and I set off to explore the Mercato di Siracusa “Markets”. The Ortigia Street market is really great place to explore when you are in sircacuse, the markets are nice and authentic with a stream of locals snapping up the best and freshest produce and fish you can buy. Also if the weather is amazing this is the perfect place to stop by for picnic items on the way to the beach.

Be aware that prices for the same item can change significantly, I paid €5 for almonds in a pretty package while I saw almonds in a plain package at a different store for €2.50 so maybe have a bit of a look around before buying…

I got some amazing fresh strawberries for just €1.75 which was pretty reasonable for a market snack. But sadly I didn’t find any mandarins but I did see plenty of blood oranges.

The 7th century BC ruins are located right next to the markets, and you probably only need a few minutes to admire what remains.  You would barely know the significance of the attraction based on the signage around the monument.  You can admire the temple from the rails erected to protect the site.

I ended up walking around most of the island and almost went for a swim, I could see a heap of people lying on the pebble beaches suntanning but only a handful of them appeared brave enough for the water.  I had hopes that the weather would get warmer during this trip and this wouldn’t be my only chance to swim in the sea. 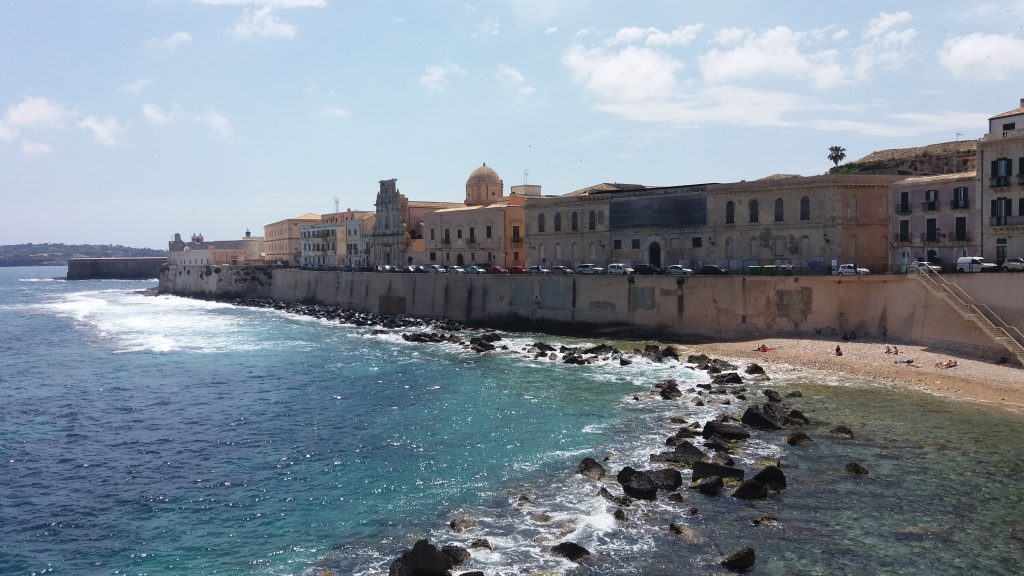 I walked along the marina and stopped at Marina Cafe for a quick recharge… some amazing ice cream as the sun was out and it was quite a bit warmer now. After my recharge I was now prepared to explore some more of the city and head over towards Teatro Greco, Orecchio di Dionisio, Archageological Park Neapolis and Roman Amphitheatre to get my dose of history and why I came to Syracuse.

While the amphitheater is well persevered considering it’s age the access areas are poorly maintained and when I visited a majority of the paths were closed so you couldn’t explore the remainder of the area.  As per the photo below you can see a majority of the structure including the seating areas,tunnels that have been dug into the rock that was fairly impressive.  It wasn’t that busy when I visited which allowed for some great photos without people blocking my photos and the sun was out so I was able to take some great photos. I have seen in other travellers photos that at times they do allow visitors to enter the field in the middle of the stadium but this was not possible when I visited.

The interesting part about this historical attraction is that it’s still regularly used to hold concerts still during summer, when I visited in May they were placing down wooden planks to build seats over the top of the original stone seats.  Sure the view is nice it was a shame when I visited that it was more like a construction zone. I would imagine it would be impressive either without the temporary seating is finished watching a live performance or seeing it in it’s original condition.  I felt that the Teatro Antico di Taormina was much more impressive and offered a much more exciting view of the coast. 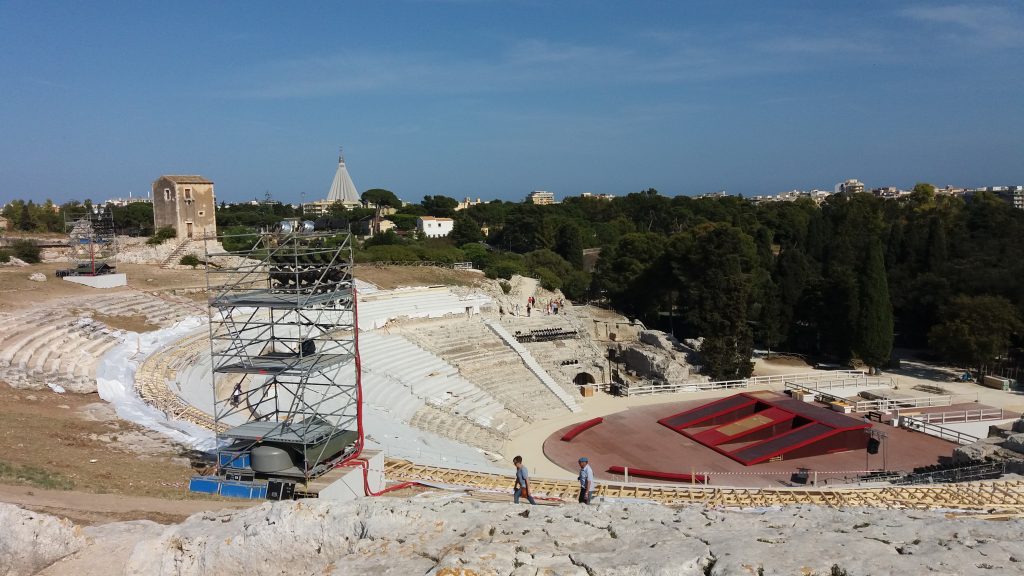 There are some interesting caves along the top of the theatre including a lovely waterfall shown in the picture below that flows under the theatre, I found this the most interesting part. 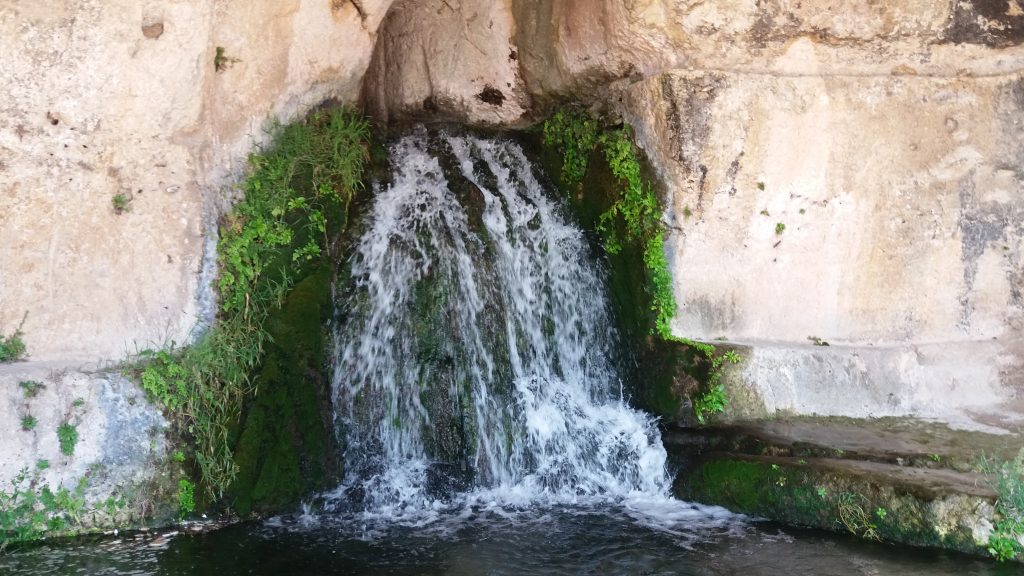 These are the remains of the huge limestone quarries that were dug out to build a large number of the buildings in the city.  You can see Abbey of Saint Trinity in the center of the gardens rising up out of the orange groves.  You can visit the gardens on the way to Teatro Greco and on a hot summers day I’d much prefer to spend a few hours here sitting and relaxing under the shade of a tree. They could certainly improve the area with better signage and open up several of the paths they have closed. 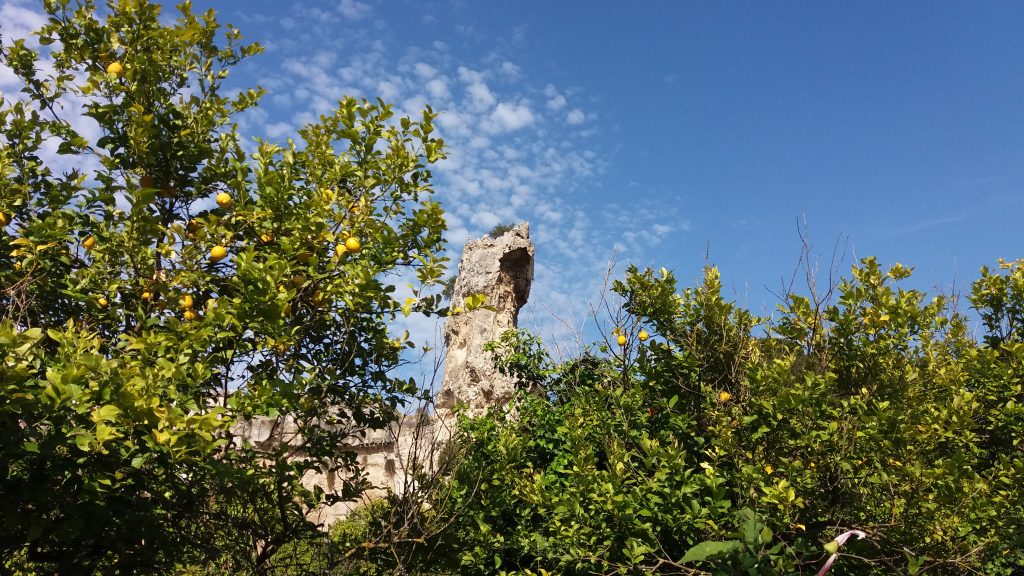 It was by pure dumb luck that I stumbled upon this spot, if you are lucky you might catch someone singing in the cave which allows you to experience the true acoustics of the cave.  Sadly I only caught someone singing a few random words but the sound was pretty incredible, just make sure you avoid this when there are a bus load of tourists as the random yelling followed by their echos can be a bit annoying. The limestone cave was man made and according to legend Dionysius used the cave as a political prison and is probably the most interesting part of the tour.

Just like Palermo I noticed that Syracuse had a huge amount of street art scattered about the city, along with plenty of tags and vandalism. 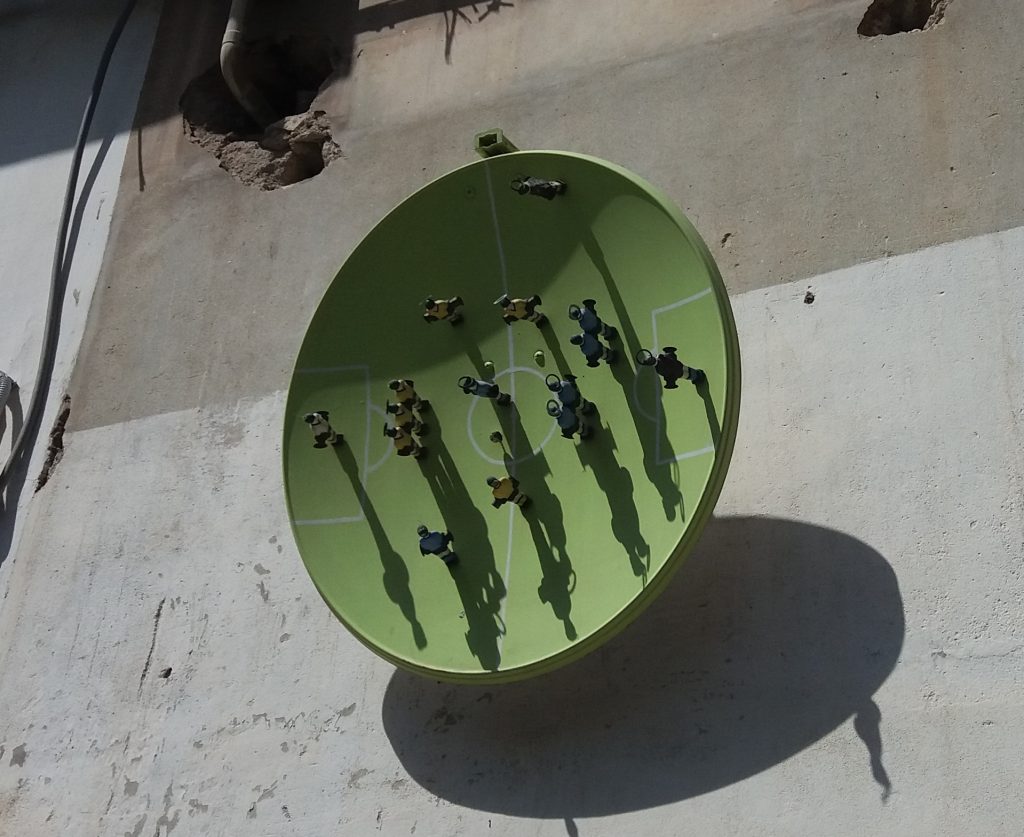 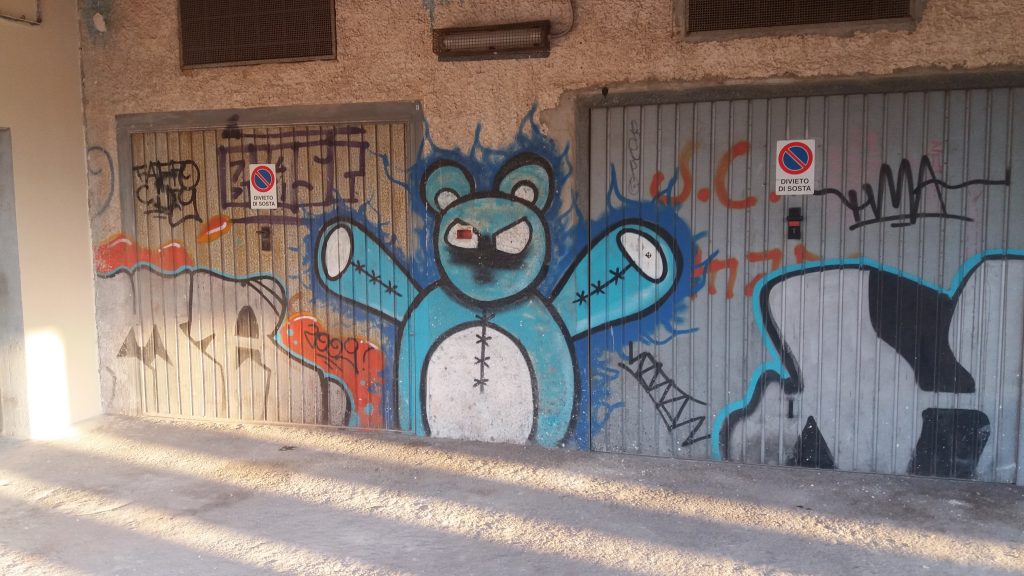 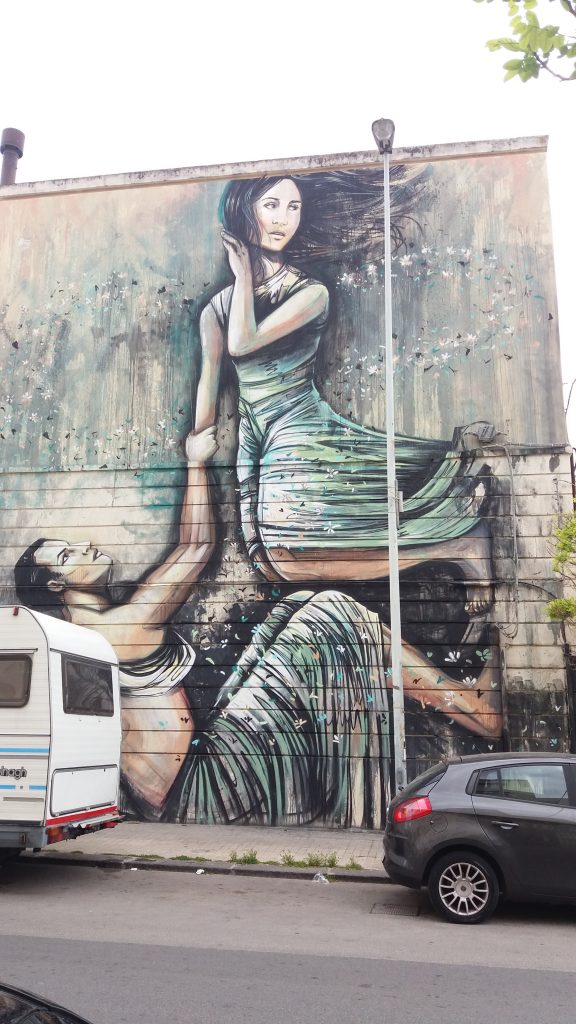 The Shrine of Our Lady of Tears was probably one of the more interesting churches I’ve visited and very modern structure completed in 1994 but started in 1966.  It was built to accommodate pilgrims drawn to a plaster image that tears were said to emanate in 1953.  The structure can be seen from almost everywhere in the city and is a good way point if you are trying to gauge the direction you should be going. 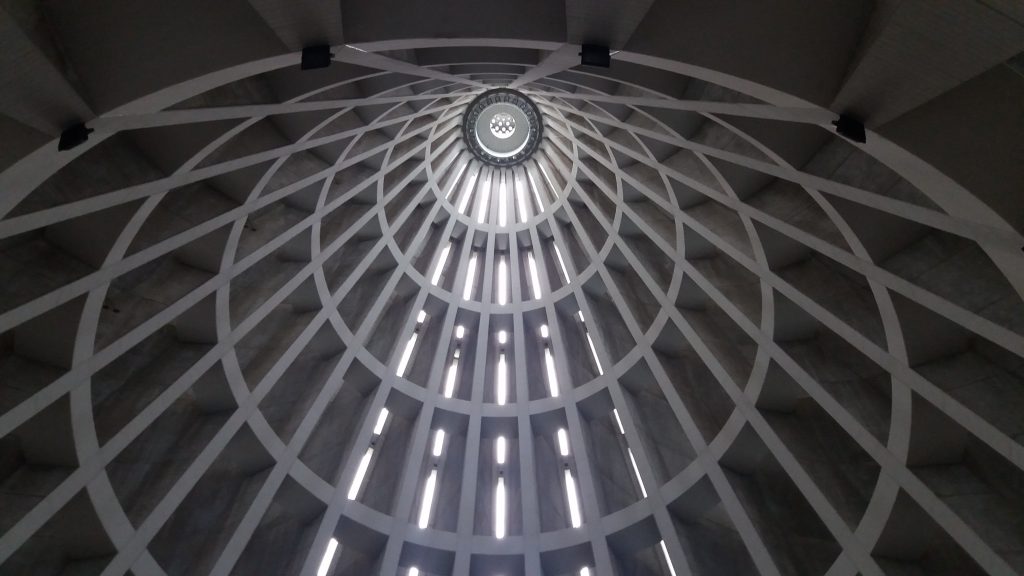 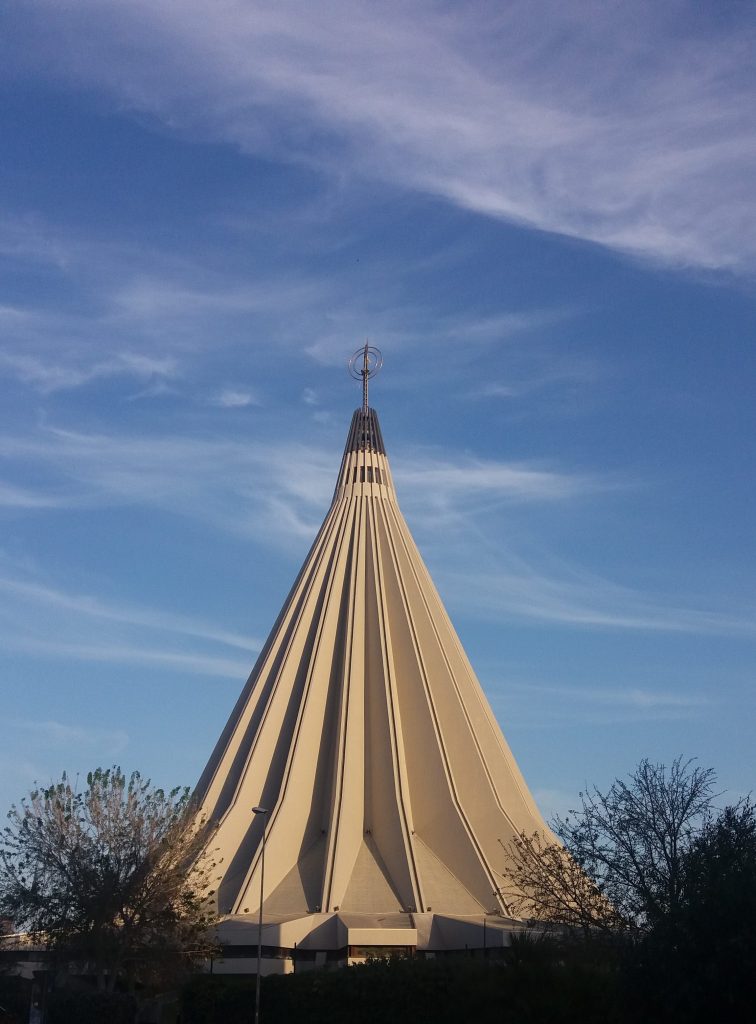 I also found plenty of places to eat but the food was a little bit more expensive than Ragusa.

This is a wonderful little local dessert shop tucked into the wall just next to the Chiesa di Santa Lucia alla badia, so if you are in Palazzo Arcivescovile you can’t miss it! They have 4 different options for Cannoli the plain, lemon, chocolate and pistachio and two sizes Small “piccolo” or Large “grande”. I would suggest if you have to wait a while for dinner consider the grande option!

Prices start from 2 euros upto 3.5 so it’s a fairly good price for a decent Cannoli, I went with the pistachio one in a small size as I didn’t want to ruin my appetite. 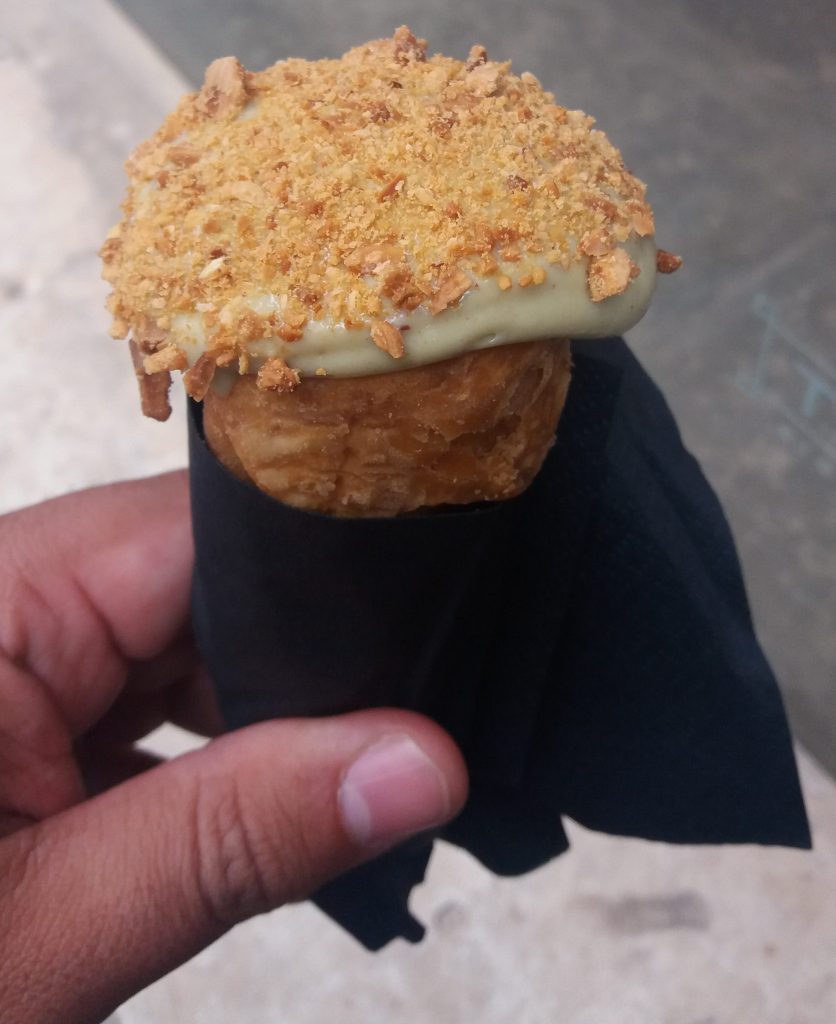 I almost walked past this place, I wasnt sure if I wanted an ice cream but after much hesitation and coaching from friends back in Amsterdam I gave in…  I was actually shocked how amazing their ice creams looked,  they had some of the most amazing flavours I’ve seen so far in Sicily. Sure it’s not like Baskin &  Robbins with 101 different flavours but everyone looked wonderful. I went with a large cup (€3.50) wasn’t the most expensive and I could have gotten a larger cup but decided to save some room for dinner. I went with chocolate, strawberry and coconut and it was simple epic. 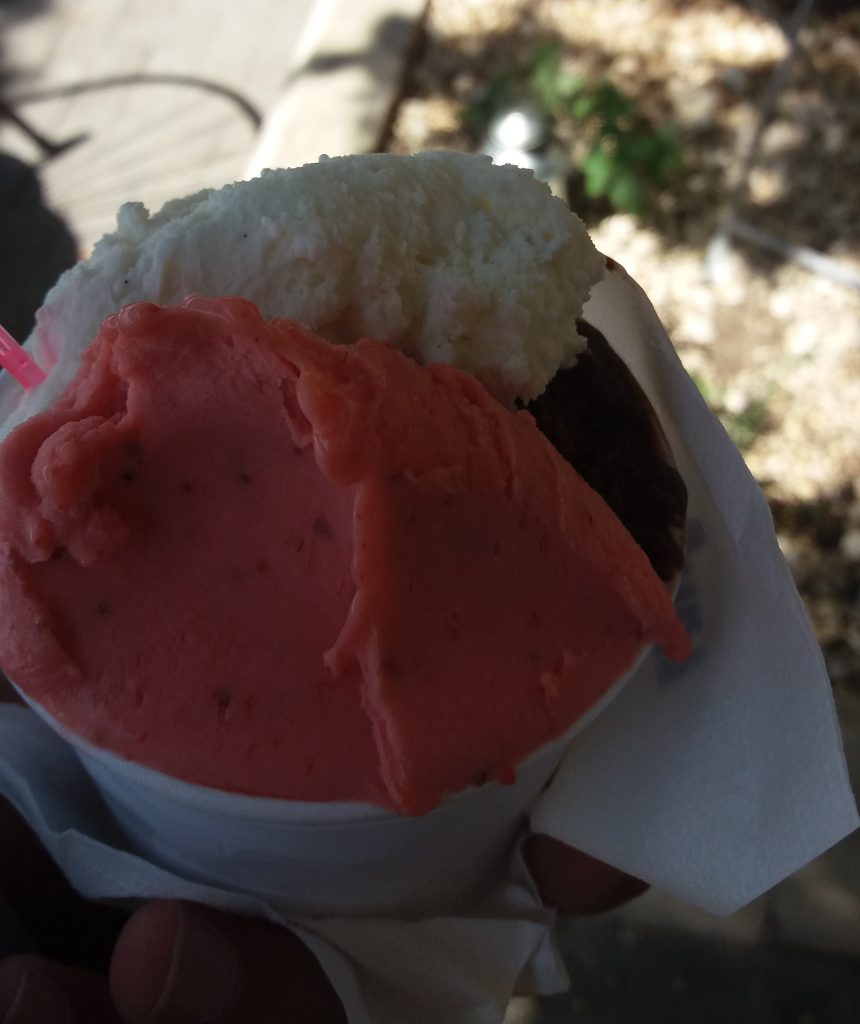 I did think about the cheesecake option but stuck to my choices…  Drop by here and grab an ice cream if you are in the area for sure, you can see how amazing some of the options look below. 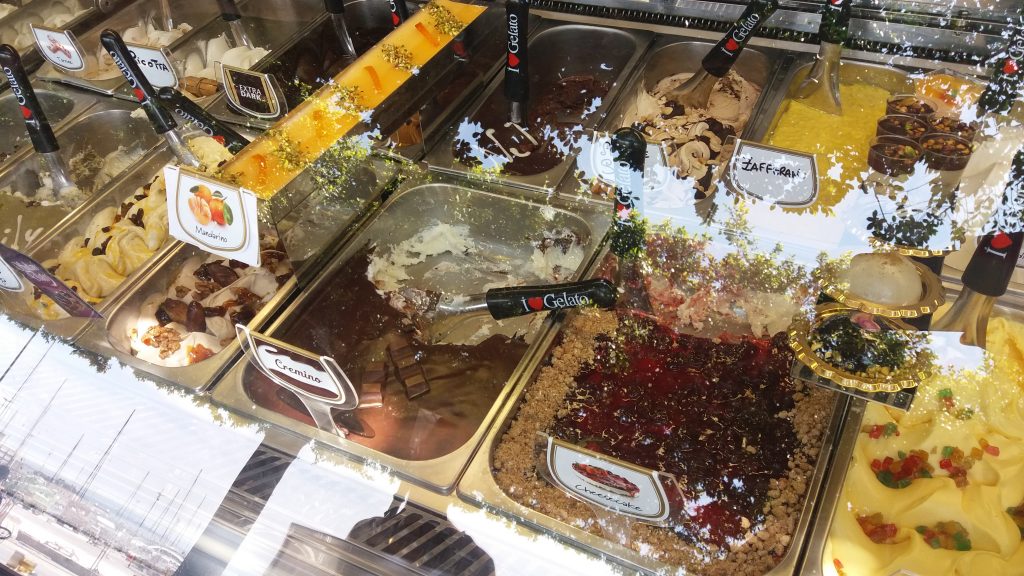 I stumbled upon this lovely little eating area at the end of the markets, they had a decent menu of slow food options but I went with the prosciutto crudo di parma (parma ham with buffalo mozzarella) and it was amazing! I found the prices were a bit high but for the location and the quality of the ham and mozzarella it was worth the €12.50 for a platter and a bottle of mineral water. As other people have pointed out you can head inside and order the same meat/cheese from the counter cheaper but I was happy to sit down, relax and enjoy the market atmosphere. 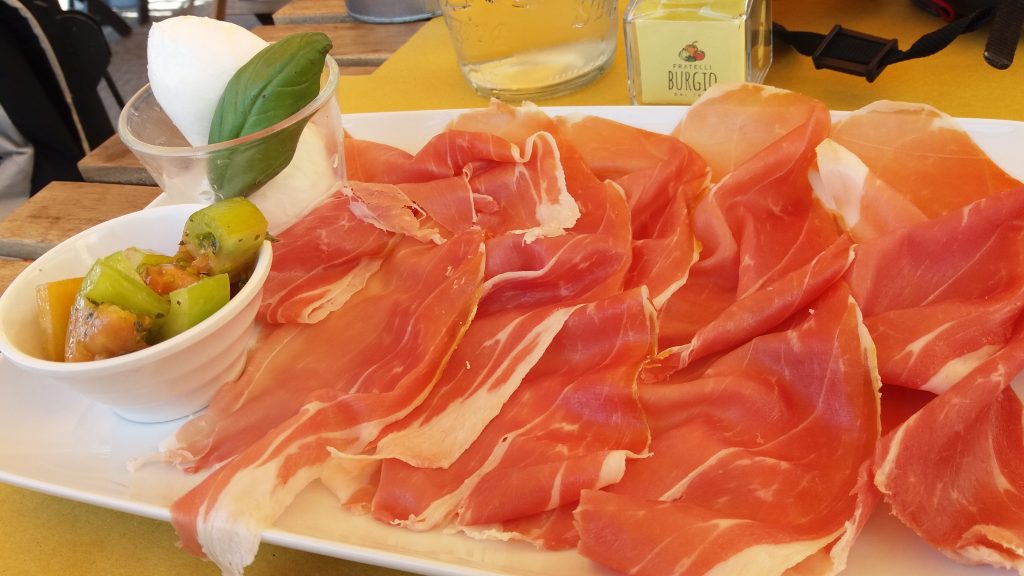 I had a lovely walk thru the ccity and stumbled upon this place after reading the advice of another Yelp elite member Enzo. I ended up having a lovely carbonara pasta that used ricotta cheese and parsley which made for a refreshing mix of what can be a very heavy pasta dish.

The staff were super friendly and welcoming and I would strongly recommend you drop by here if you are heading into Ortygia as the prices are far better here than in the old town, as I paid €10 for my pasta and a bottle of water. 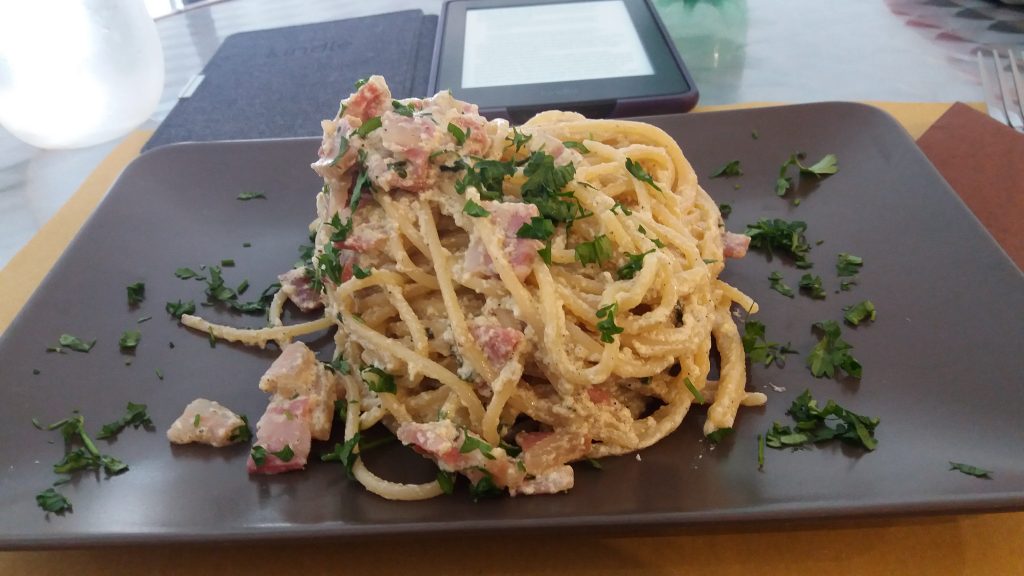 A great little coffee shop serving just magical hot chocolate…  They have 5 different types. To select from: dark, pistachio, white, normal and another one I forgot…  I went with the pistachio and 3 small cakes and it was a perfect sugar hit to keep me running until dinner later. 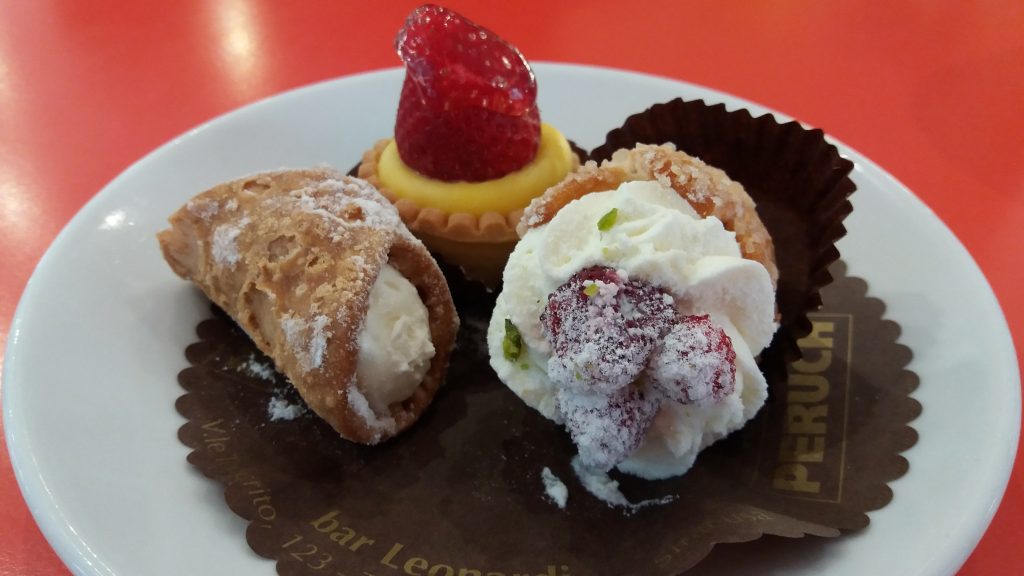