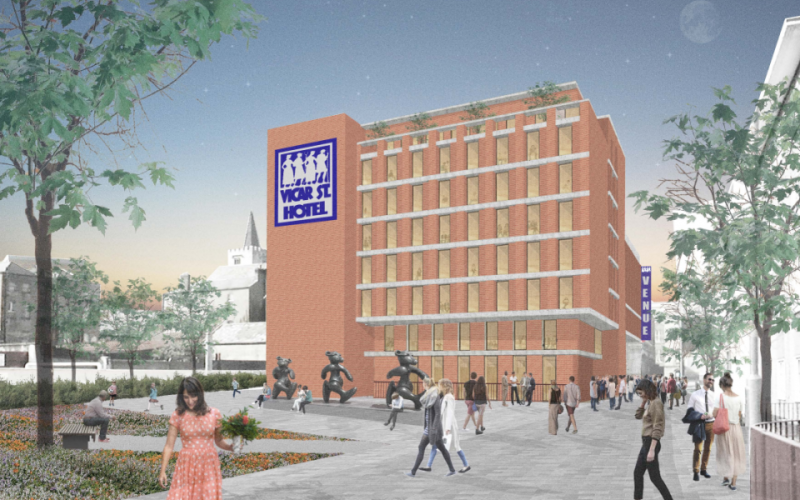 The concept of “Rock and Room” is the representative detail of the new hotel that was built by businessman Harry Crosbie on Viscar Street. Viscar Street, Dublin, is the best known place in the city and has witnessed a hundred memorable concerts and events; It opened its doors in 1998 and received musical giants such as Bob Dylan, Neil Young and Paul Simon, among others.

This hotel with the concept of “Rock and room” is ready to be part of the series of emblematic buildings built by the Irish entrepreneur Harry Crosbie.

The employer will grant customers packages available for Viscar Street, in addition to a hotel room and food.

Harry told the Sunday World that “You can reserve a 4-star room, which costs direct access to your seat.” There will be a membership club on the top floor with a 7,000-square-foot bar overlooking the city with the same views than the Guinness Store. ”

In view of the fact that the place has been very popular, the main stage has been moved so that it can cover an additional 500 seats, giving way also to the renovation of the headquarters of Viscar Street.

Promoter Peter Aiken said: “We will increase the range of talents they present and improve the experience of attending a concert.”

It is important to mention that Harry Crosbie has made events that have marked his mark in the capital, such as the restoration of the Hotel Clarence with U2, he has been honored with an OBE from the Queen of England for his work in the Royal Visit and Be part of the team of 3 men who delivered at the National Center for Conventions and Development of Spencer Dock.

This part of the city of Dublin is currently neglected, so he and his wife, Mrs. Rita, is in talks with some investors to jointly develop and finance the site next to Quarter and Storehouse, giving it to the city a better showiness; He also envisaged the construction of a green park on the back of the site for the local community.